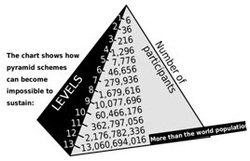 A pyramid scheme is a non-sustainable business model that involves promising participants payment or services, primarily for enrolling other people into the scheme, rather than supplying any real investment or sale of products or services to the public.

The flaw is that there is no end benefit. The money simply travels up the chain. Only the originator (sometimes called the "pharaoh") and a very few at the top levels of the pyramid make significant amounts of money. The amounts dwindle steeply down the pyramid slopes.

Individuals at the bottom of the pyramid (those who subscribed to the plan, but were not able to recruit any followers themselves) end up with a deficit.

The human race, as we know it, has become the greatest pyramid scheme ever devised because the unchecked growth of the population and the unrestricted exploitation of the world’s resources are moving the human race further and further down the pyramid of sustainability.

Humans: An Endangered Species is a practical look at what we’ve done and what we must seriously consider if the human race is to continue to grow and more importantly, to survive.

Written as a logical look at the history of mankind’s unending desire for population propagation and its self-justifying need to indulge itself with the concept of ‘more is better’, Humans: An Endangered Species takes a statistical approach to understanding who we are, what we’ve done, and what we’re dooming ourselves to unless we take drastic and immediate steps to curtail our unrestrained growth and exploitation of our planet’s resources.

Pertinent excerpts from the book to stimulate your thinking:

Every major problem facing humanity, without a single exception, will not and cannot be solved or even ameliorated without reducing the population growth of humans to zero; or, more likely, until the number of humans presently inhabiting the Earth is substantially reduced from the current (2011) 7.0 billion. Every major problem currently facing humanity will be solved or greatly ameliorated when the human growth rate is reduced to zero, or made negative. Those who believe that the collapse of civilization and/or the collapse of the social order will not commence for years into the future are just plain wrong.

* * * * *
Let us do a little math together and see how population would grow if each of Justice Scalia’s nine children had nine children, and this continued just for a few generations (I have chosen Justice Scalia as an example because he is supposed to have a modicum of intelligence and should be known to most Americans as he is a famous Justice of the US Supreme Court):

* * * * *
The Food and Agricultural Organization of the UN (FAO) has issued a sobering forecast on world food production. If the global population reached 9.1 billion by 2050, the FAO has projected that world food production would need to rise by 70% and food production in the developing world would need to double. Of course, unless population decreased subsequent to 2050 the amount of food produced annually would have to forever remain at those increased levels. While no one can predict the future with total certainty, it is almost certain that those levels of food production could not be achieved, let alone maintained forever. The forecast of the FAO did not take into account the possibility that population would be greater than 9.1 billion in 2050 or that population would continue to grow subsequent to 2050.

In November 2011 the FAO issued a report that stated that 25% of the world's land was "highly degraded" with soil erosion, water degradation, and biodiversity loss. Another 8% was moderately degraded, while 36% was stable or slightly degraded. The UN also found that around the world water is becoming ever more scarce and salinated, while groundwater is becoming more polluted by agricultural runoff and other toxins. And the degradation of the Earth's soil is continuing and will continue into the future as the population rises until there is a sudden production collapse causing the deaths of billions.

Categories (b) and (c) are sub-categories of non-violence or sub-categories of the intelligence of humankind. Since category (a) (war, starvation, etc.) would result in the destruction of civilization as we know it, it is not a viable option. For the reasons set forth herein, I do not believe that humankind will voluntarily reduce population and economic growth to zero or make both of them negative prior the deaths of billions of human beings and the destruction of society as we know it. If I am correct, then the only way to reduce population and economic growth to zero or make it negative such that humanity will survive is by the action of all of society or a group that will control population by effective sanctions against those who reproduce against the established rules.

* * * * *
The economic law of supply and demand applies to every resource on the planet, and since the demand is increasing every day due to the increasing population and the exploding world economy, and since the supply is finite because no resource is infinitely large, or because the supply is decreasing due to the usage by humanity, the cost of every resource must eventually increase no matter the intelligence or creativity of humankind. This effect is compounded by the fact, set forth above, that every day it is becoming more difficult and expensive to obtain the resources as humanity has already used the easiest and cheapest resources available.

* * * * *
According to the experts, a few human beings arrived on Easter Island and found a vacant island paradise. Population grew and grew until humanity destroyed the island paradise, until all or almost all of the resources of the island paradise were destroyed and resource wars followed which resulted in the deaths of almost all of the humans who had inhabited the island. While no one has made a scientific analysis of the intelligence of the inhabitants of Easter Island, there isn’t any reason to presume that, on the average, they were any less or more intelligent than the rest of humanity. According to those who have studied Easter Island, the situation became so bad that those who remained alive resorted to cannibalism, and to make the situation even worse, they were forced to eat those they killed raw because there wasn’t any fuel on the island to cook those to be eaten. Again the cause of the death, destruction, and cannibalism, was the excess population in relation to the resources that could be provided by the island.

The very same thing will occur to the rest of humanity on the planet earth. If humanity uses more resources than can be provided by the planet on an annual basis, our species is doomed. While the entire planet is larger than Easter Island, there isn’t any difference between Easter Island and our planet. They both are finite in size and both have resources that have been or will be exhausted.  The intelligence of humankind will not change the result. The intelligence of those who lived on Easter Island did not change the result.

* * * * *
Anyone who disagrees with the concept of limiting population and economic growth must take the position that both can grow infinitely large on the finite earth, and that position cannot be logically defended—it cannot happen. Since both the economy and population must cease growth, we are left with two and only two questions—when and how will both cease. It is almost axiomatic that the larger the population and the larger the economy, the more difficult it will be to cease the growth of either or both. Growth tends to be self-perpetuating, and the longer growth continues the more difficult it will be to prevent the destruction of humankind. Anyone who believes that growth can continue without resource wars with weapons of mass destruction must be correct in his/her position forever. He/she cannot be wrong even once. Humanity cannot permit a single war with weapons of mass destruction as that war would probably result in the almost total annihilation of all of humanity, and surely would result in the destruction of civilization as we know it. Humanity cannot afford the gamble.